Amaranth is another ancient grain that is widely used and easily available in Latin and South America. It has a long history of use with the Aztecs in their religious ceremonies involving human sacrifices.

Because of that the Spanish conquistadors forbade the use of amaranth for many years and almost died out except that some small pockets of people in Latin America continued to grow it.

Today it is popular in these southern cultures. It is milled and roasted to make the Mexican drink atole. It is also popped and mixed with a sugar solution to make Alegria also in Mexico.

Peruvians used the fermented grain to make beer. In Mexico and Peru, the leaves are used as a vegetable and in Ecuador, the flowers are used to make a healing drink. It is also used in India and other Asian countries and often there the leaves are consumed.

There are over 60 different species of amaranth but the more common is a bushy plant that grows from 5 to 7 feet tall. It has broad leaves and a beautiful flower with small red clover-like flowers. The seeds are tiny and are a golden tan color.

Amaranth’s moderately high content of oxalic acid inhibits much of the absorption of calcium and zinc. It should be avoided or eaten in moderation by those with gout, kidney disorders or rheumatoid arthritis.

Reheating cooked amaranth is not recommended, particularly for consumption by young children, because the nitrates in the leaves can be converted to nitrites, as in spinach.

Amaranth is a grain that I have not used yet but I do have friends who have and I have gone to them for help and recipes. My friend Lisa who has used it extensively did so while living in Mexico City with her family who she needed to keep gluten-free.

It was one of the few gluten-free grains that were easily obtainable in Mexico. I got this recipe for Amaranth Pudding from her. 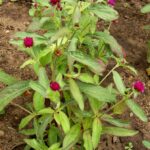