Crazy for Quinoa: An Introduction

Quinoa is consumed as a grain but it is technically not in that category. It shares family traits with spinach, swiss chard , nd beets and is considered by some to be a “pseudo-cereal.”

It is a ggluten-freegrain but does contain oxalates (like its other family members) so for those avoiding oxalates it is not a good choice.

Quinoa is a grain that is high in protein and it is one of the few grains that is a complete protein with all nine essential amino acids with phytonutrients and minerals as well.

Quinoa comes in several colors. Most common is the white quinoa but there is also black quinoa and red quinoa. SSometimes the three are sold together as a tri-color mixture.

Quinoa should be stored in an airtight container for three to six months. It will keep longer if in the refrigerator.

How to Prepare Quinoa

Quinoa is best known as a cooked grain. After soaking (see below) it can be cooked in water in a 1:2 ratio. Bring to a boil and then cover and let simmer for about 15 minutes.

Use Quinoa In Place Of:

Quinoa can also be ground into flour or purchased as flour and used in gluten-free baking. It has a slightly sour aftertaste so works well for foods like English Muffins and bread

Thoughts to Consider About Quinoa

So with all that it should be a no-brainer about incorporating more quinoa into your diet, right? Well, maybe not so fast.

The Price of Quinoa

There are a couple downside to quinoa. One is the price as a pound of quinoa can range from $3 to 10/lb. Although if you are using it as a meat substitute that isn't too bad. The other issue that needs to be raised is the ethics of eating quinoa.

Most quinoa is grown and harvested in South America and has long been a staple food for the native peoples there. Now that there is a large demand for it in 1st world countries like the USA many farmers are choosing to sell their quinoa overseas and try to reap more of the price benefits.

The Social Impact of Importing Quinoa

Peru is the largest producer of quinoa with Bolivia a close second. The quinoa grows well in the high altitudes of the Andes Mountains. This leaves the native peoples with perhaps a bit more money but without their staple food crop to eat and so they are turning to more processed foods and losing the good nutrient base of the quinoa they have been used to.

There is a small amount of quinoa that is now being grown in the US in the Rocky Mountains in particular. Be aware that there are ethical questions which each person needs to answer before quinoa is made a regular part of one's diet.

The third issue is that some people get stomach aches from eating quinoa and the issues seems to be something called saponin which is a naturally occurring, pesticide-like, soapy residue. To get rid of this the quinoa must be rinsed beyond where the water runs clear.

My favorite recipe for quinoa is from Heidi Swanson at 101 Cookbooks (great website by the way). I've included it here and added my own adaptations. It is so well liked at my house that my son requested it with the green beans for his 11th birthday. 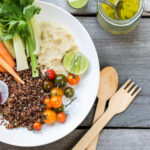 The Ethics of Quinoa