Rye Flour Doesn’t Have to be Hard

Lately we have covered mostly gluten free grains but this week we are covering rye, a grain that does contain gluten. It is a cereal grain and closely related to both wheat and barley (the other 2 gluten containing grains.)

Rye flour contains much less gluten than wheat and that gluten is of poor quality in trapping air bubbles. Breads made with mostly rye flour do not rise as much as those with wheat and the bread tends to be more dense with smaller holes.

On the other hand, rye has more free sugars than wheat, so rye dough ferments faster. Most rye flour sold in the US is whole, with none of the germ and bran sifted out, but it is labeled medium, not whole, to distinguish it from pumpernickel flour, which is a more coarsely ground whole rye flour.

Because it is kept whole, rye flour usually retains a large quantity of nutrients, in contrast to refined wheat flour.

Rye is higher in these elements than wheat.

Rye is one of the most recently domesticated cereal crops. Unlike some other cereal grains that can be traced back to prehistoric times, rye was not cultivated until around 400 B.C. It was first grown in this manner in Germany.

Rye is thought to have originated from a wild species that grew as weeds among wheat and barley fields. Rye was not highly regarded and so took a second place to wheat and other grains and was relegated to food for the poor. But it also tends to grow better in the cooler parts of the world, so in some of those countries it continued to be grown because it was a hardier grain.

Today, the majority of the world's rye comes from the Russian Federation. Poland, China, Canada, and Denmark are among the other countries that also grow rye commercially.

Rye flour works very well in sourdough bread and it is the only way I have used it. Rye is high in the enzymes that break starches into sugars which can lead to gummy bread. If made with a sourdough starter the action of the enzymes is slowed and the texture of the bread will be more pleasing to most people.

The rye flour is in a large enough proportion so that it is advisable to add all or most of it as a rye sourdough. There is enough rye so that a distinct rye flavor is tasted. However, there is enough wheat flour to provide gluten to form the kind of crumb we associate with wheat bread.

This recipe is from The Vintage Remedies Guide to Bread. 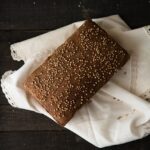