The Impact of Corporal Punishment on Parents and Children

Editor's Note: As more details of Adrian Peterson's corporal punishment of his sons comes to light, I am inviting Jay Scott Fitter, a licensed family therapist with 20 years experience helping families, to speak to us on the topic of corporal punishment.

Jay says parents who hurt their children were usually themselves victims of child abuse. Peterson himself suffered repeated “whippings” as a boy (read more here). But Jay also says that the generational pattern of child abuse can be stopped.

While I know that not every reader will agree with Jay on the subject, I hope that you will read this article with an open mind and that discussion on the topic will be respectful. I look forward to hearing your thoughts in the comment section below. – Vanessa Pruitt

It seems that for every argument made by an expert about the negative impact of corporal punishment, there is another expert advocating its benefits. Ultimately, a parent will be able to find support for whatever their opinion is on the subject. There is no shortage of viewpoints on this topic.

My own perspective is based on more than two decades as a family therapist, during which time I have worked with countless numbers of parents and children, both in private practice and in residential facilities and juvenile hall. I also have a personal connection to this topic, having grown up in a home where corporal punishment was the primary means of discipline. Finally, I have been a parent for the past 25 years.

Corporal Punishment Is a Temporary “Solution”

I believe that corporal punishment is the fastest and easiest way for a parent to address a problem. It requires little thought or preparation and can be used to address virtually any issue.

In some ways, spanking a child or yanking them violently is like a giant Band-Aid to address anything a child does that annoys Mom or Dad. The problem is that Band-Aids don't do much to heal an underlying infection. Lashing out at a child temporarily covers up the problem; the child will usually whimper or cower or cry or become silent. So on the surface, parents believe they have things under control. Unfortunately, corporal punishment does nothing to address the festering issues that caused the behavior in the first place.

Spanking or hitting is a temporary fix that, if committed often enough, can lead to disastrous consequences over the long-term. Unfortunately, parents don't often recognize the impact of their choices until many years later, and sometimes never.

Here's how a parent's bullying leads to new problems for the child. A child is out of control in school and bullying his peers. Mom can't understand why her son is constantly getting into fights, or picking on other children in the class. She fails to recognize that hitting another person to get them to do something was role-modeled to this child by the most important people in his life. Not only was it role-modeled, but the child has first-hand knowledge that it works.

When you're bigger than someone and you can instill fear in them, they will give in to your authority. That's the message the child has learned, and it's a value they'll carry with them into adulthood. More than likely, they'll base their own parenting on this value, and the cycle of abuse will continue into the next generation of parents and children.

Another consequence of corporal punishment for children is that they don't learn how to solve problems. Just as parents may hit a child when they are frustrated, rather than figuring out why they're frustrated and trying to resolve the issue through talks, kids learn this same coping mechanism.

So often, there is a correlation between spanking and the level of frustration a parent is experiencing in any given day. The rules and discipline in the house are completely contingent upon the kind of day you had. So if your boss was tough on you, or you didn't make that sale, or someone cut you off on the freeway, the likelihood of a spanking increases dramatically. If this is your situation, then maybe it's time to rethink your motivation. Are you really trying to teach your child, or venting your own frustration in an easy way?

Based on how you dealt with behavioral issues, did your child learn how to solve conflicts, how to express their feelings, how to communicate effectively, or how to be a good parent in general? Your answer to these questions will play a big part in your view of corporal punishment. 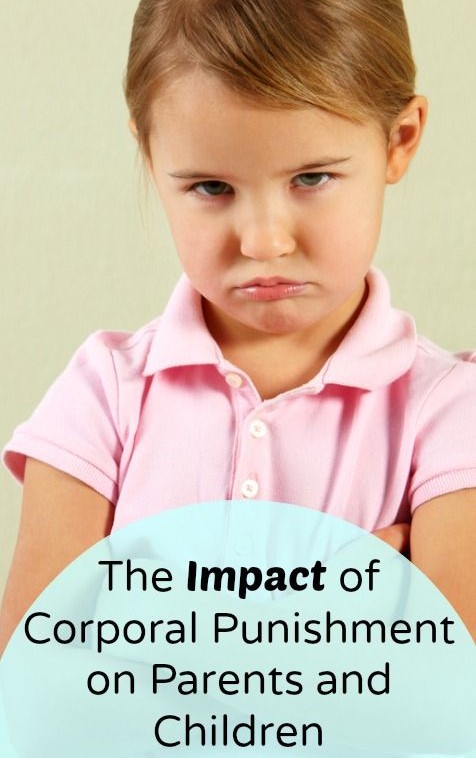 Jay Scott Fitter MFT has two decades' experience as a licensed marriage and family therapist and is a popular parenting workshop leader, speaker, and the author of a new book, Respect Your Children: A Practical Guide to Effective Parenting (familyanswerman.com).