Dating
Home›Relationships›Dating›Why Do Men Pull Away in the Early Stages of a Relationship?

Why Do Men Pull Away in the Early Stages of a Relationship?

It's frustrating. You've met a good guy and the two of you seem to have quite a bit of chemistry. He's showing up, planning dates, and putting in effort, and you start to imagine what it would be like to be in a relationship with this guy. 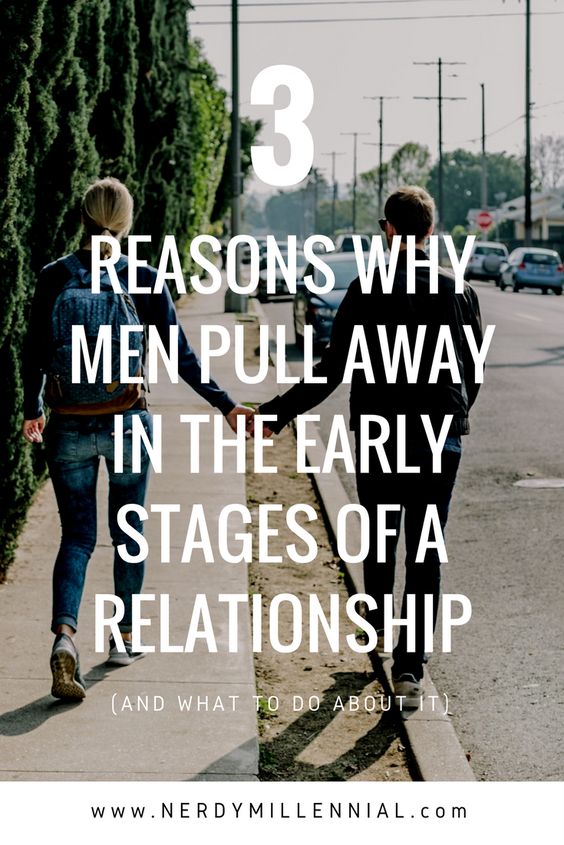 But, after a few weeks or months, you notice that he doesn't seem to be as connected to you. You thought he was starting to open up to you, when suddenly he feels distant. You start to wonder if he's really even interested in you anymore.

Although it feels counterintuitive to many women, it's normal for guys to go through several phases of “pulling way” before they commit to a woman or move forward with the relationship.

Let's talk about some of the reasons that men pull away in the early stages of a relationship.

Just because a guy is pulling away, doesn't mean he's losing interest in you altogether or that you have anything to worry about.

When a guy pulls away, he's subconsciously taking a step back from the relationship to take an inventory of himself, the situation, and his feelings for you.

When he comes back from each “distancing” phase, he'll likely be a little more sure of his feelings for you, and more confident in his decision to be with you. Isn't that what you want?

What are some signs that he's pulling away vs. losing interest in you?

If He's Pulling Away…

He will stay consistent – He may be a little vague or be texting a little less often, but he'll still keep in touch. He may take a step back, but he knows if he disappears, he'll be risking the relationship. He's not looking to do that.

He still wants to see you – If he's distancing himself, he'll still be open to seeing you, just maybe not as often.

He becomes erratic or unreachable – If the man you're seeing is really losing interest, he'll give one-word answers or stop responding altogether. The consistency of your interactions will fade.

It will be clear – It will be painfully clear that he's on his way out of the relationship. Even if he eventually does decide to make his way back, you should be cautious. He may try to reenter the relationship as “just a friend” or just for sex (if you've gotten to that point). 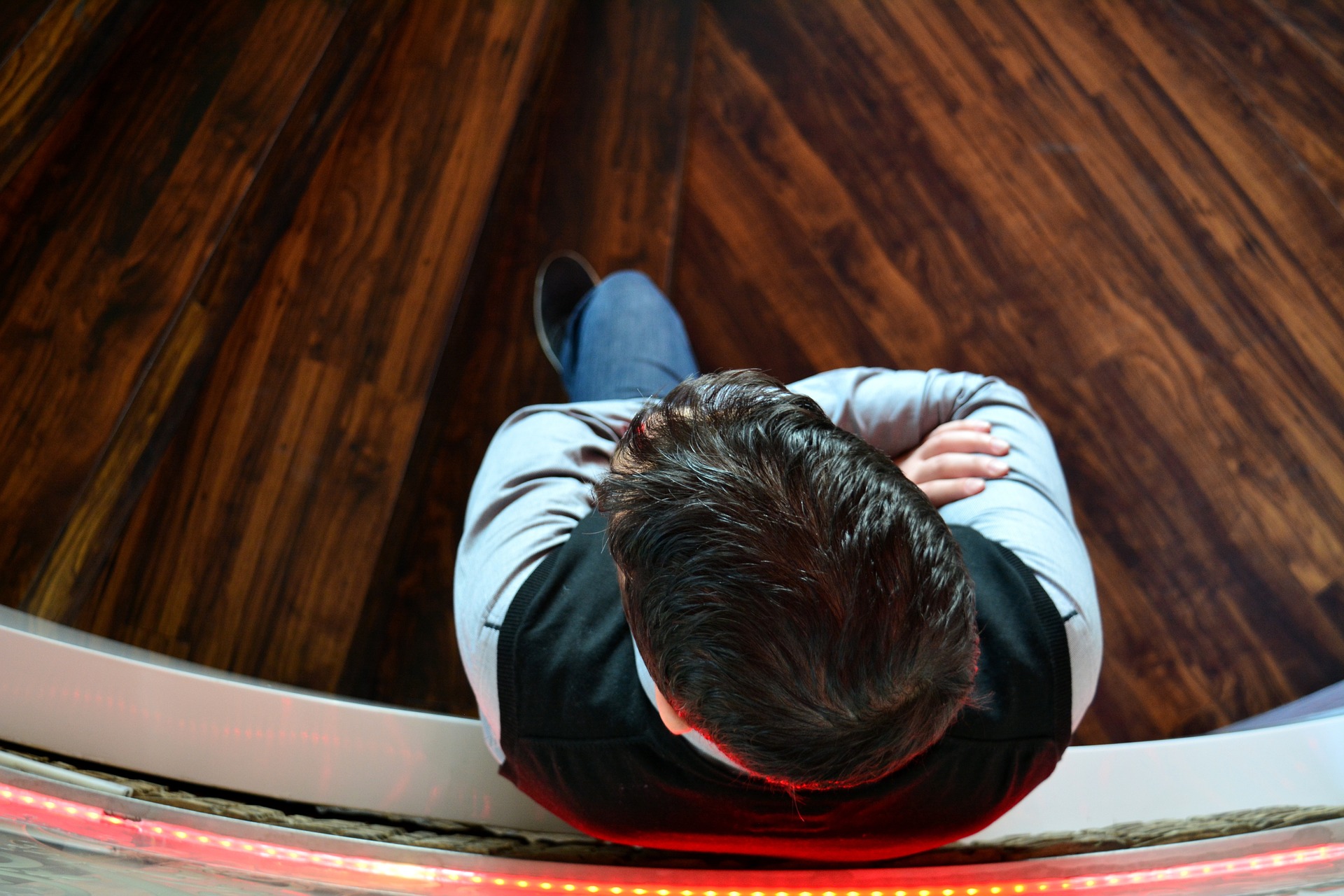 Why Do Men Pull Away?

Let's get down to it. Why do men pull away in the early stages of a dating relationship?

There are a few reasons why the guy you are seeing may be distancing himself.

Especially if he's been hurt in the past, his reason for pulling away may simply be fear. Fear of being vulnerable, fear of getting hurt, and fear that he could get into a relationship with the wrong person.

Feeling vulnerable to a woman can be scary and uncomfortable for many men. If he's taking a step back and claiming some space for himself, it doesn't mean he doesn't want to be vulnerable with you. It just means he wants to prepare himself and make sure he's ready for it.

The trick is to not take it personally. Don't try to force him to open up to you, and don't put pressure on him. Relax and enjoy your time with him.

Demonstrate that you can be patient and low-key and that you aren't going to push him to be vulnerable with you before he's ready.

It's important to remember that his reasons for pulling way may have nothing to do with you. It could be that his life has gotten a little busy or stressful since you started dating, and he just needs some time to handle his business.

Whether it's work, kids, family, or friends; Remember that you are not a central part of his life yet, and he may need to take a step back from you to handle things that are more important.

Don't take this personal and don't act entitled to his time and attention! Pushing him to put you at the center of his life will only push him away, and make you seem self-centered.

Instead, relax and demonstrate to him that you support his need to handle his life. Reassure him that you're ready to spend time with him whenever he's ready.

This last reason can be the hardest for women to deal with. Simply put, he may be distancing himself because he feels pressure to commit.

If a guy is going to move forward with a relationship, he wants to feel as if it's his choice. And trust me, you want him to be sure of that choice.

If it's not his choice, one of two things may happen. One, he may completely bolt and give up on the relationship, feeling as if he will never be able to freely make his own choices with you. Two, he may wonder weeks, months, or years down the road whether he was trapped.

Recognize that his commitment to you has to come from within himself. That is the best kind of commitment, after all.

Take a step back yourself and communicate to him that you like him and enjoy spending time with him, but that you don't want to force him into anything.

Learn to communicate your standards, and stand confidently in your needs in a dating relationship. But, don't try to force him into filling a role that he's not ready for.

What NOT to Do When He Pulls Away

The #1 thing you should never do when a guy pulls away at the beginning of a relationship is to freak out or overreact. Don't push him away or try to pull him closer.

The best thing to do is to act as if nothing has really changed. Don't nag him or ask him what's wrong. Don't start texting him more or trying to get him to communicate more. And most of all, don't act passive aggressively by not responding to his texts or playing mind games.

Take a deep breath. Step into a confident mindset and remind yourself that a man distancing himself from you doesn't mean that you are not worthy or interesting. 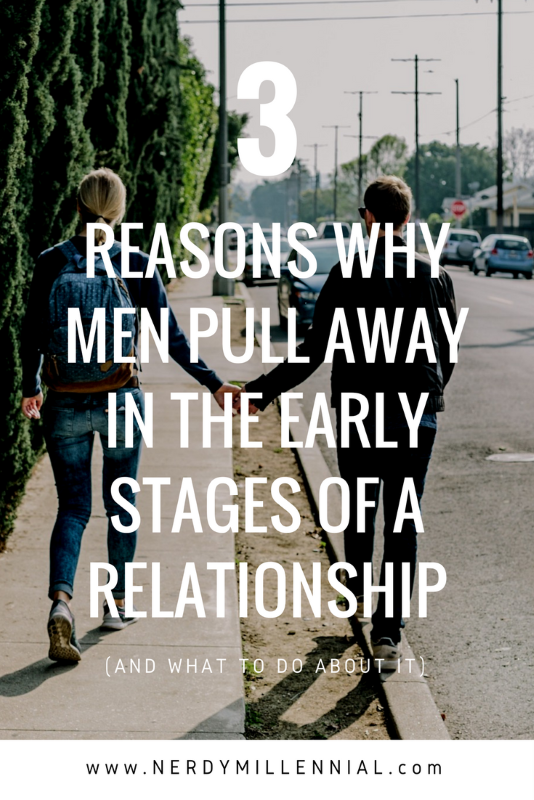 What is your experience with men pulling way at the beginning of a relationship?

Tagsdatingrelationshipswhy do men pull away