Why Women Pull Away: What She’s Really Trying to Communicate

It's frustrating. You've met a fantastic woman and the two of you seem to have quite a bit of chemistry.

But, after a few weeks or months, you notice that he doesn't seem to be as connected to you. You thought he was starting to open up to you when suddenly he feels distant. You start to wonder if she's really even interested in you anymore.

What happened? And what can you do differently now and in the future to prevent this from happening?

The short answer is, it depends on why she's pulling away. This is not always easy to predict or understand. But, if you can clue yourself into why she seems distant, you may be able to do something about it.

Just because a woman is pulling away, doesn't mean she's losing interest in you altogether or that you have anything to worry about.

When a woman pulls away, she may be subconsciously taking a step back from the relationship to take an inventory of herself, the situation, and her feelings for you.

When she comes back from “distancing” herself, she'll likely be a little more sure of her feelings for you, and more confident in her decision to be with you. Isn't that what you want?

What are some signs that she's pulling away vs. losing interest in you?

If a Woman is Pulling Away…

She will stay consistent – She may be a little vague or be texting a little less often, but she'll still keep in touch. She may take a step back, but she knows if she disappears, she'll be risking the relationship. She's not looking to do that.

She still wants to see you – If she's distancing herself, she'll still be open to seeing you, just maybe not as often.

She becomes erratic or unreachable – If the woman you're seeing is really losing interest, she'll give one-word answers or stop responding altogether. The consistency of your interactions will fade.

It will be clear – It will be painfully clear that she's on her way out of the relationship. Even if she eventually does decide to make her way back, you should be cautious. She may try to reenter the relationship as “just a friend”.

Now, let's talk about some of the why women pull way, and what you might be able to do about it.

#1 – She Has a Fear of Vulnerability

Many women have a fear of being vulnerable with someone new. Especially if she has been hurt in the past, she may have a fear of getting into a relationship with the wrong person: someone who is going to take advantage of her.

If she's taking a step back and claiming some space for herself, it's not that she doesn't want to be vulnerable with you. It could be that she wants to prepare herself and make sure she's ready to open up to you.

Don't take her distance personally, and don't try to force her to open up to you. The less pressure you put on her during this time, the better. Try to enjoy the time you have with her and relax as much as possible.

In order for her to feel comfortable, she needs to feel at ease around you. She needs to know that you will be patient with her and that you won't push her to be vulnerable with you before she's ready. She will need to open up on her own terms, not yours.

Related Article: Why Men Pull Away In The Beginning of a Relationship

Every person's romantic feelings develop at a different pace. She may really like you. Perhaps she even loves you. But the relationships could be moving forward faster than she is ready for.

It's normal for people to freak out a bit when they're falling in love. Having feelings for someone could make her feel off balance and like she's on an emotional rollercoaster.

She also may not be ready to be as intimate or affectionate as you are. Perhaps you are too lovey-dovey for her at the moment. It's not a bad thing to be so into her, but it can be overwhelming.

Simply put, take things easy. Slow down a bit, and let her lead the way.

When you're hanging out, keep some physical distance from her for. Don't be cold or act uncomfortable, but let her take the initiative on physical contact. For example, if she leans into you while watching a movie, simply put your arm around her. Show affection, but with respect and caution.

The same goes for expressing your feelings for her verbally. Avoid talking about your future with her unless she brings it up. Focus on the present, and only plan ahead to your next date.

All in all, if she's feeling pressured, you should remove that pressure. Let your intimacy and future together unfold naturally.

We all have certain hopes and dreams for our future. Perhaps she sees herself having 3 kids and you have told her you don't want kids at all. Maybe you envision a house and a white picket fence, while she wants to get more education or build a career before she settles down. It could be as simple as her knowing that, deep down, you each have values that are very different. Having different values is a big reason why women pull away.

No matter what her reasoning is, she may not see the future she wants with you. This is in no way a reflection of her feelings for you. It's possible to fall in love with someone who doesn't want the same things in life as we do.

Recognizing that you both want different things, and should probably be in a relationship with someone different, doesn't negate the feelings you've shared for each other or the time you've spent together.

#4 – She's Unsure How You Feel About Her

Communicating how we feel about someone can be difficult, especially in the beginning stages of a relationship. Even if she's really into you, she may not be sure of how you feel about her. Either you are not communicating that you like her, or you're sending very mixed messages. In this case, she may be pulling away to avoid getting hurt.

No doubt you've experienced liking someone more than they like you. It hurts. And it hurts even more if they lead you to believe they are into you, only to find out later that they don't.

In her mind, if you don't communicate that you like her, it's the same as you not liking her.

Stop playing mind games. If you're playing “hard to get” this late in the game, you're going to lose her.

Maybe you're holding back because you're afraid of getting hurt yourself. But, if you don't tell her (and show her) how you feel, she's going to move on to someone who will.

#5 – She Still Has Feelings for Someone Else

Perhaps she's not over her previous relationship. Or, she has had feelings for someone for a very long time who does not have the same feelings for her.

Sometimes, we don't even recognize how strong our feelings are for someone until we try to have a relationship with someone else. Unfortunately, this is a big reason why women pull away.

If you think she still has feelings for someone else, but you still want a shot with her, go easy on her.

Here are some needs that she may feel are not being met:

Every person needs to feel secure in their relationships. Right now, she may not feel that she can trust you.

Whether you have cheated in a past relationship, are obviously not over your ex, or can't stop flirting with other girls, she may have the impression that you're not invested in her.

We all have a need for verbal and physical affection in romantic relationships. However, some of us require more affection than others.

She may have a greater need for affection than you. And when you don't show her the affection she craves, it can make her feel disconnected and unwanted.

Healthy relationships are built on acceptance. Everyone can change and improve. But, your partner needs to feel as if she is accepted for who she is. If you're actively trying to change her, she's going to feel like she isn't good enough for you as-is.

Especially if she is confident in herself and her life, your non-acceptance of her will be a huge turn-off.

Want to learn how to better meet both of your needs in the relationship? See if you can find out what you and your partners love language is.

Most people have one or two primary love languages that make them feel loved, accepted, and appreciated in a relationship. Learning how to “speak” each other's love language can lead to a happier relationship and a deeper connection.

What NOT to Do When She Pulls Away

The #1 thing you should never do when a woman pulls away in a relationship is to freak out or overreact. Don't push her away or try to pull her closer.

The best thing to do is to act as if nothing has really changed. Don't nag her about what's wrong. Don't start texting her more or trying to get her to communicate when she doesn't want to. And most of all, don't act passive aggressively by not responding to her texts or playing mind games.

Take a deep breath. Step into a confident mindset and remind yourself that a woman distancing herself from you doesn't mean that you are not worthy or interesting. 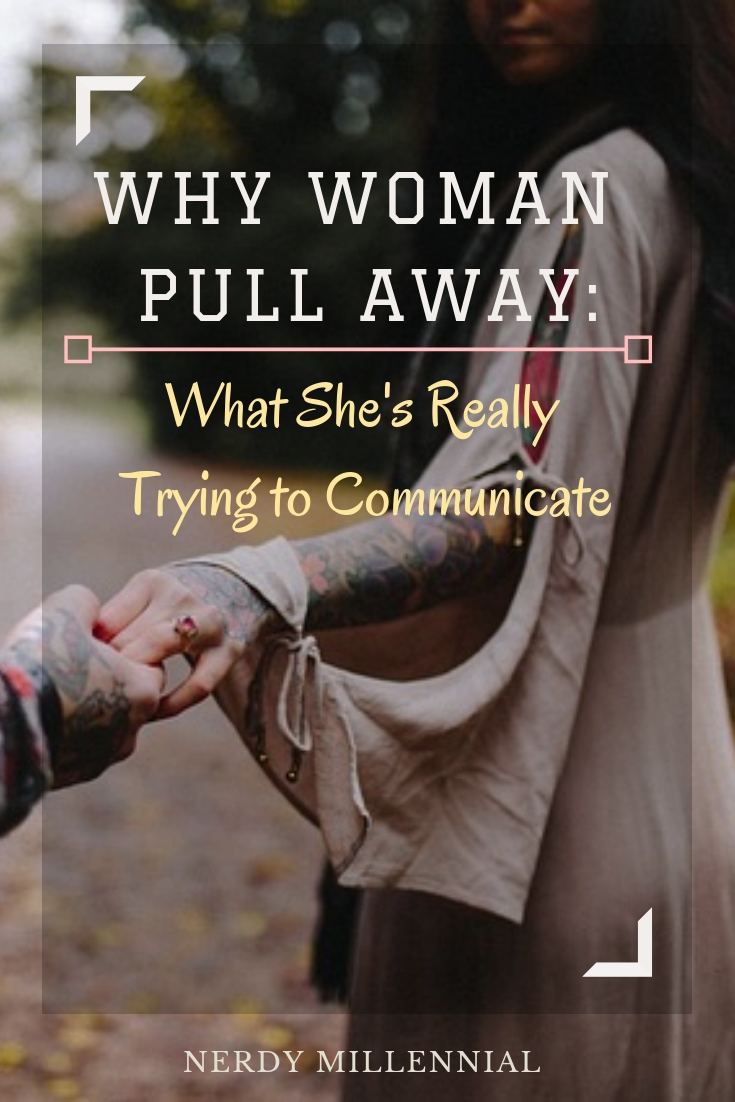 What is your experience with women pulling away in a relationship?